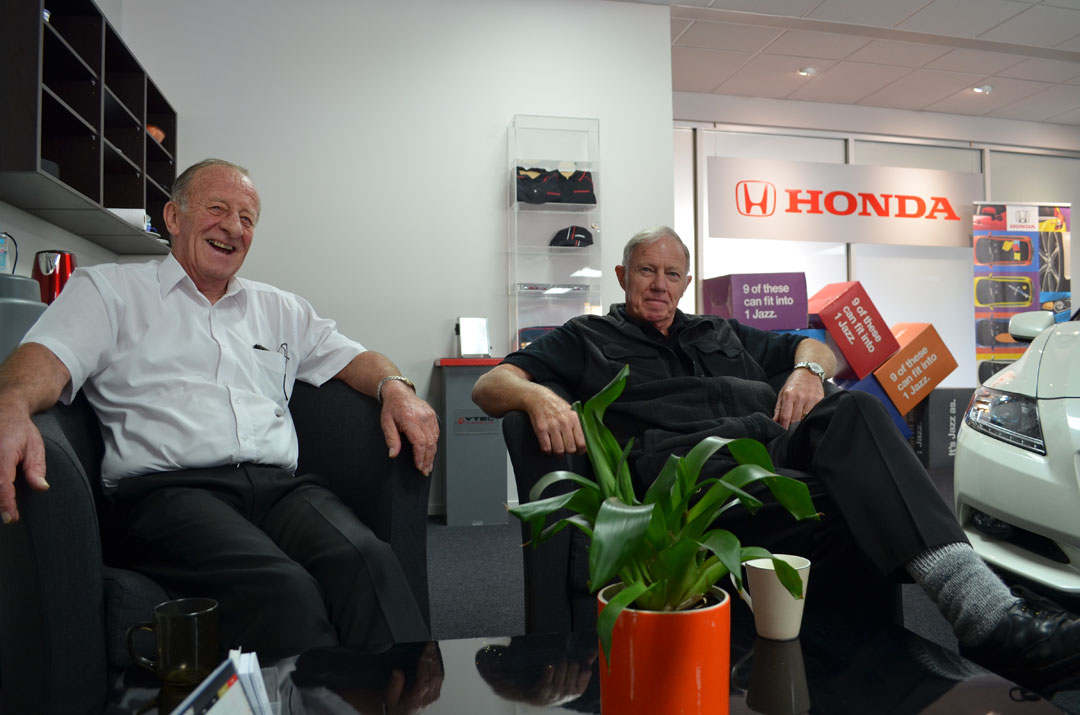 Peter Ransby and Alan Large sharing a story and a laugh at Bowater Honda. Not an unusual sight on any given morning at 10am, all visitors to the couch welcomed and appreciated. Click to enlarge.

A life well lived, echoing with an loud and infectious laugh, the constant of a love of friends and family, the pride in a garden that fed many a family, a cheeky smile to greet those that walked through the door, and an honest and loyal work ethic is certainly a life well worth celebrating.
This was just a part of the life of Peter Ransby. A man that has been such a vibrant part of the Bowater Motor Group for many, many decades, spanning a time of over 45 years.

Yesterday, at a packed Marsden House, family, friends, colleagues and loved ones all came together to send Peter off in a manner befitting a man so loved, respected and widely regarded.

After a short and valiant fight right up until the very end, sadly Peter Ransby lost his struggle the morning of September 29th at Nelson Hospital and passed on, surrounded by his family and loved ones. 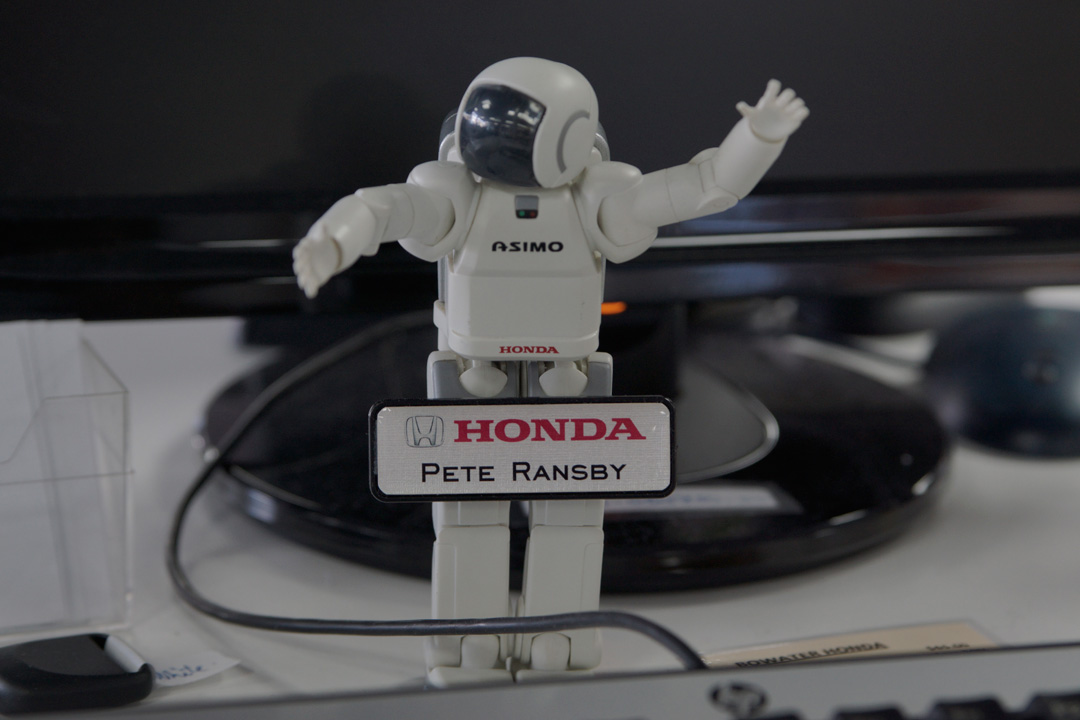 In the days following the sad news of his passing those in many of the Bowater Motor Group businesses across the region rallied together to share cherished memories of Peter. Many have commented on our Facebook post with some very kind thoughts, and flowers have arrived. A flood of humourous stories has been shared at the Bowater Honda showroom in Achilles Ave by colleagues and customers past and present, over a date scone and a cup of tea or two, as we all came to grips with the loss of such a respected and appreciated colleague, contributer, mentor and friend. A new kind of sound has been ringing out in the showroom at Bowater Honda over the last couple of days - the sound of friends and family coming together to celebrate a life well lived.

With great honour, respect and reverence Bowater Motor Group chairman Rodney Bowater, who had worked alongside Peter for many many years, was invited by Peter's family to share words at the funeral. Rodney spoke of a great loyalty from Peter, and a deep respect and appreciation for a colleague committed to the success of a business that relies so much on reputation. Peter was highly regarded in the industry and especially within the company itself, a company that prides itself on Family Values and Value for Families. Peter personified this quality as evidenced by the obvious loss being felt by his large extended biological family, his workplace Bowaters family and the loving memories shared to those gathered by those that spoke at the service.

The life and times of Peter Ransby. Just one of the many photo boards at his service.

From his early days as an apprentice mechanic at Bowaters through to his latter years as Parts and Service Manager for Bowater Honda, Peter has certainly made himself known to a great many people throughout the community. The tightknit team from Bowater Honda have been fielding a large number of calls from customers, friends and previous co-workers as it was his role at Bowaters that has been the constant through Peter's life - no matter what, you always knew where you could get hold of Peter Ransby - at Bowaters. 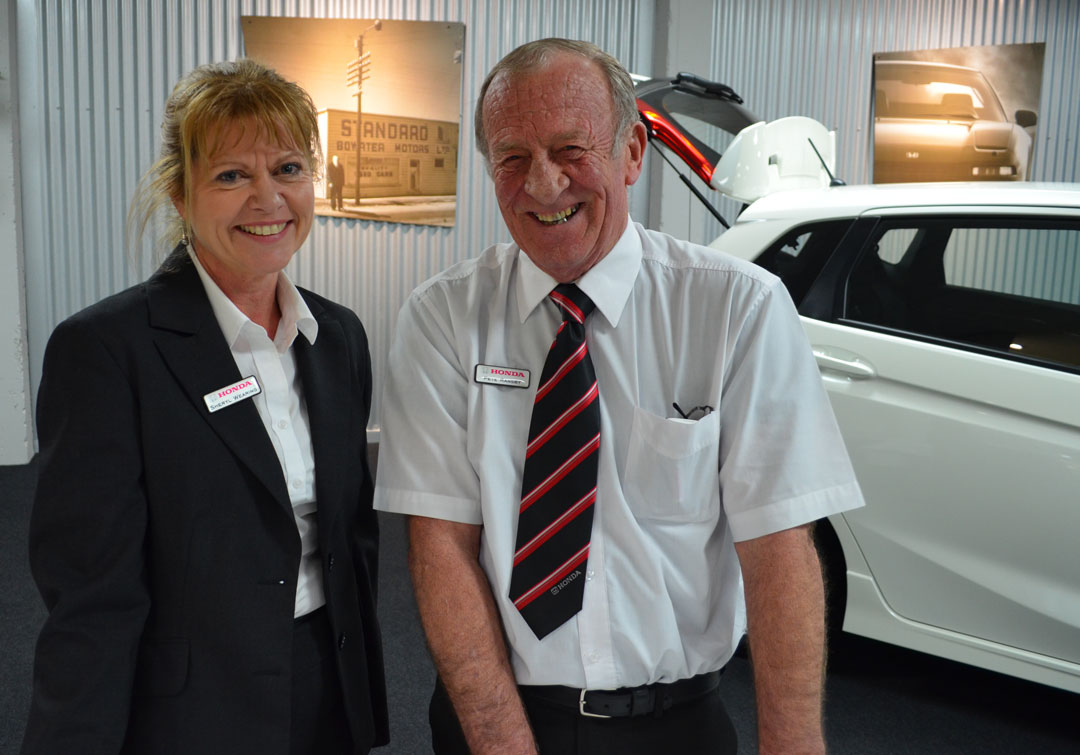 Sheryl and Peter on the launch night event we held for the new generation Honda Jazz in July of 2014. Click to enlarge.

He started his working life right here in Achilles Ave as an apprentice mechanic at Bowaters in the early 1960's, and returned to almost the exact same spot many years later in early 2014 with the establishment of the newly refurbished modern Bowater Honda showroom. This slight shift in geography over the almost 5 decades was not lost on Peter and he relished the new position of being able to greet almost everyone that walked through the doors of the new showroom, most of whom he knew by name. Always keen to chat, share a smile and a joke, Peter has certainly been a driving force behind the success of Bowater Honda in the 20 plus years he has been in the service department. 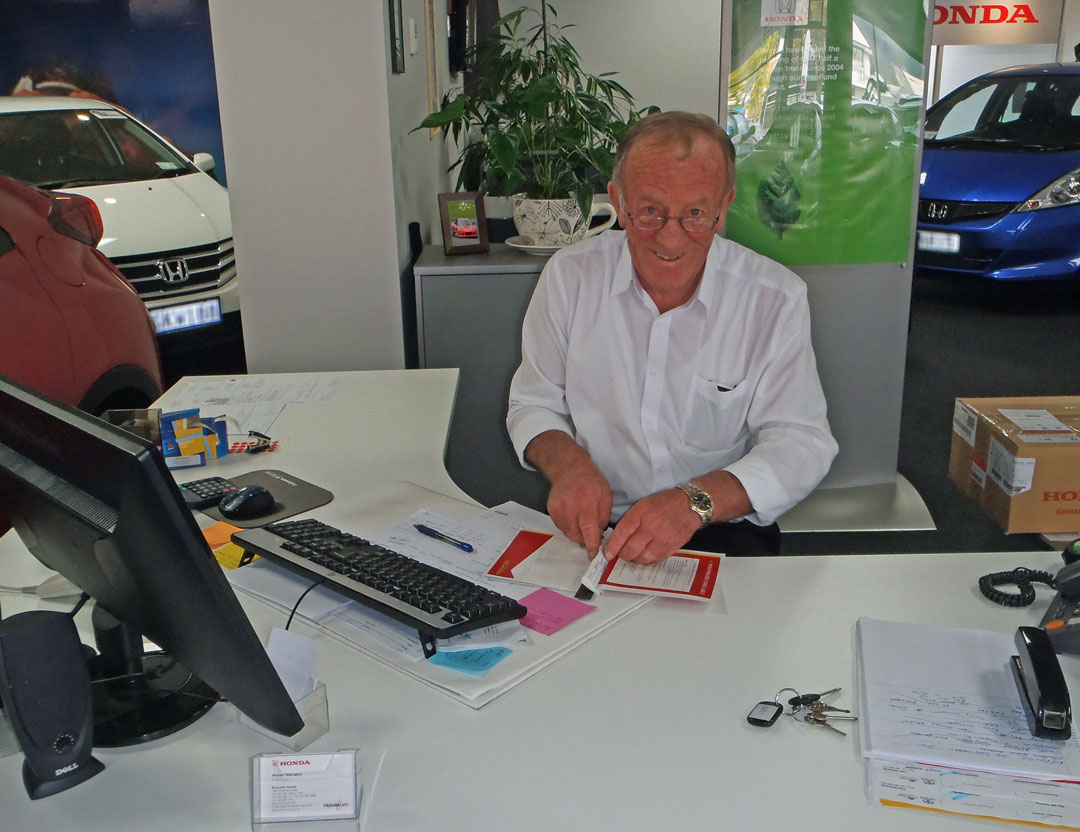 His passing came as quite a shock to us all, and we pass on our condolences to his family and loved ones. A large thankyou must also go out to the staff and carers at Nelson Hospital, Nelson Tasman Region Hospice and the Christchurch Hospital.
Rest in peace Peter. Thankyou for the decades of hard work, knowledge shared, colleagues helped and most of all the laughter. You will be dearly missed and fondly remembered by all of the team at the Bowater Motor Group. 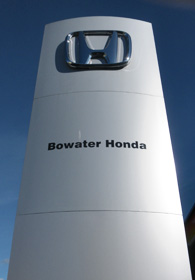 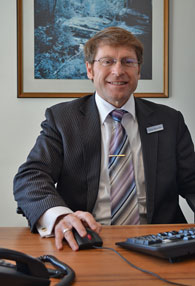