The first Prius Challenge has come to a close here at Bowater Toyota in Nelson with a stunning last day drive from local eco warrior and eco home builder Nick Marer from The Little Pig Building Co.

When Nick took the challenge he also showed us a thing or two gleaned from his years of Prius driving experience. He has owned a Prius for the last 4 years and has obviously broken free of his habits and adjusted his way of driving. He made some very smart choices, took slightly different strategies in some parts of the course, but most importantly paid attention to what was going on around him and planned well ahead so that he could gradually accelerate or decelerate at his own pace.
The result was a stunning overall score of 2.5L/100km fuel economy, a saving of 93cents for the trip over the consumption of New Zealand's favourite car, the Toyota Corolla and electric vehicle use of 67% - a well deserved win!

The video of this drive is available here, and is well worth a watch to see just how it is done. He is calm, collected and cool and in the end, the happy recipient of the all new 2012 Prius C for a week to go where ever he desires.

The previous score of 2.9L/100km, set by The Bowater Toyota business and finance manager Al Mapperly, had seemed quite untouchable.  Most people doing the challenge had the opportunity to ride along with one of the Bowater Toyota team, get familiar with the course and pick up some hybrid driving tips along the way, before jumping in the car and scoring between 3.5-4.5L/100km, which it itself is a very respectable fuel efficiency and economy compared to all other cars. You would be hard pressed to find a car that will provide you with better fuel economy than that unless it is all electric.

The whole purpose of the Prius Challenge was to engage with the wider Nelson community about the role of hybrid technology in a future of motoring.
When the all new 2012 Toyota Prius arrived at the Bowater Toyota showroom we were all impressed by the level of information that the car delivers back to you whilst you are driving. The dynamic info screens are very impressive and feature some new technology not seen in other models. We all experienced it first hand and noticed how we were encouraged to drive a little better with fuel economy in mind. It was almost like a game, and we all became quite competitive quite quickly, and the Prius Challenge was born!

It seemed a great opportunity to not only showcase an amazing new model we have available, the cheapest hybrid on the market, but also an opportunity to start talking about hybrid technology in general. This year more and more of the ranges are moving into hybrid variants. the consumer demand, even in Nelson, has certainly picked up.

The writing has been on the wall for a while now, and the big car manufacturers like Toyota have been investing large amounts into what they see as the next logical progression of development as the cost and viability of oil based power changes and the world looks to a greener future.
Which ever way you spin it cars are a big part of our world, we are all busy and rely on our cars more and more to get the daily jobs done. Whilst some would like to see a reduction of cars on the road, more shared journeys, or greater use of public transport; the reality for most people is that they jump in their cars and go - life is busy and we all have so much to get done. So perhaps in this reality the smart choices need to be not in reducing the cars on the road, but changing the kinds of cars on the road and the fuels that they run on.
Hybrid technology in cars is the beginning of this conversation, and a conversation that the big car makers, and the Bowater Motor Group, are taking very seriously.
As this technology becomes increasingly mainstream, we aim to not only offer it for sale and service to the wider Nelson / Tasman community, but also understand it from all angles, for all situations, and make informed recommendations to our customers on the hybrid vehicle that will best suit their specific needs. Like all ranges there are different cars for different uses, even within the hybrid market, and more and more of the model ranges are now offering a hybrid variant as a standard option.

The final rundown on the Leader Board.

After a busy month of Prius Challenges here is the final Leader Board - thanks to all that took the Prius Challenge, we hope that you got to experience a new way of driving and that perhaps you may even break free from some of those old habits when you drive your own car. 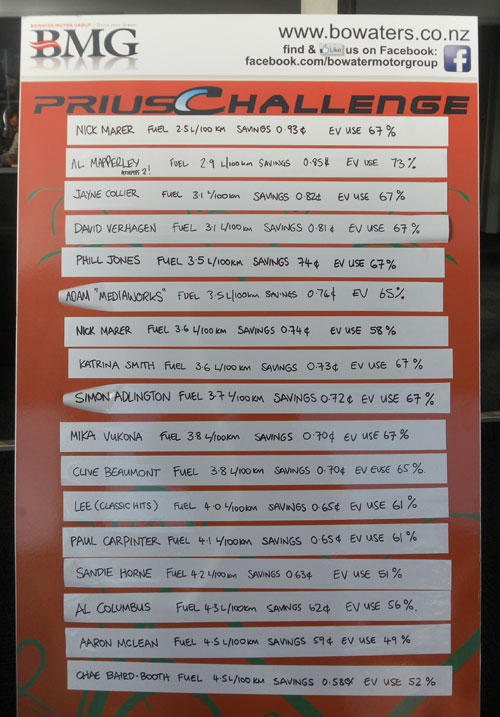 Next stop Motueka!
We will be posting the Motueka course soon so that you can get familiar with it and start planning how you will tackle the Prius Challenge!