HomeNews & Events Lexus NewsLexus launches the world's first Origami inspired car, made from cardboard, and able to be driven. 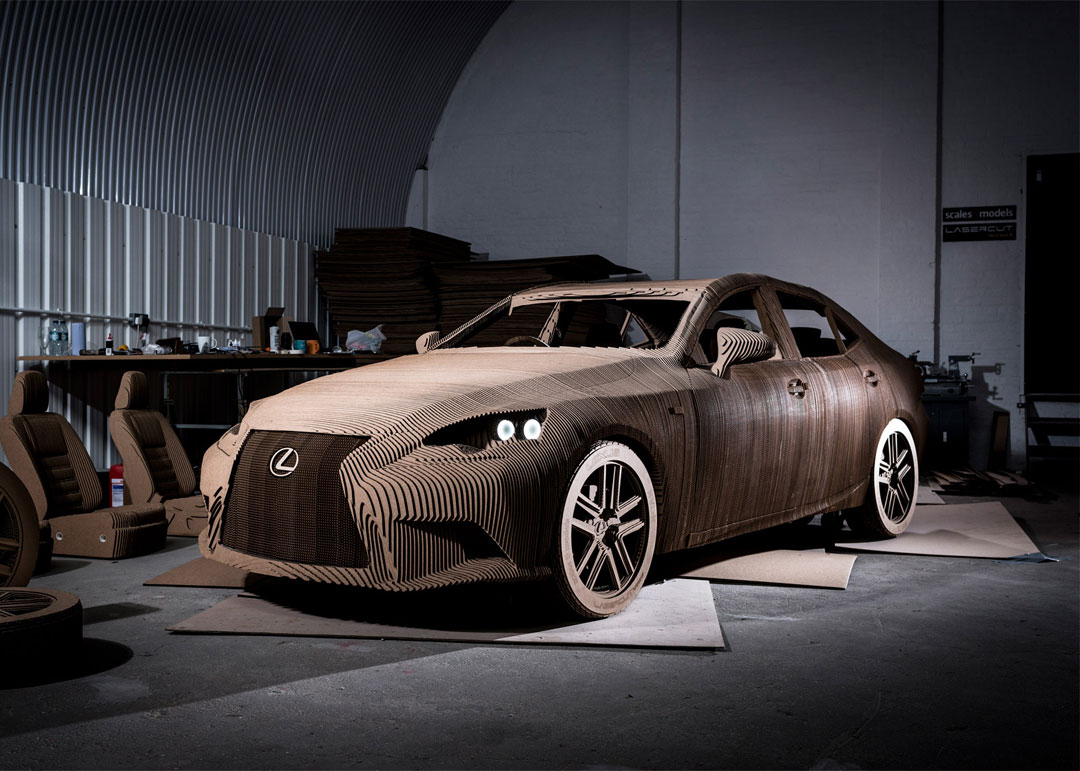 There’s never been a Lexus quite like it: infact the creation of a one-off, life-sized Lexus IS is an art project in itself - and a celebration of it's current marketing strategy of "creating amazing"

What makes this Lexus IS different, unique and inspirational is that it is crafted in precision-cut cardboard. The cardboard car is inspired, according to Lexus, by an origami test the company requires of workers on its production line—and is, at its heart, an incredibly complicated paper sculpture.

Comprised of some 1700 individually shaped pieces of cardboard, this origami inspired car is a faithful replica of the Lexus IS saloon, and is produced as a celebration of the human craftsmanship skills that go into every car Lexus makes.

With a fully fitted interior, functioning doors, headlights and rolling wheels, the “Origami” Lexus explores the design of the Lexus IS in forensic detail, and that’s not all. Thanks to an electric motor mounted on its steel and aluminium frame, it can even be driven forwards and backwards. 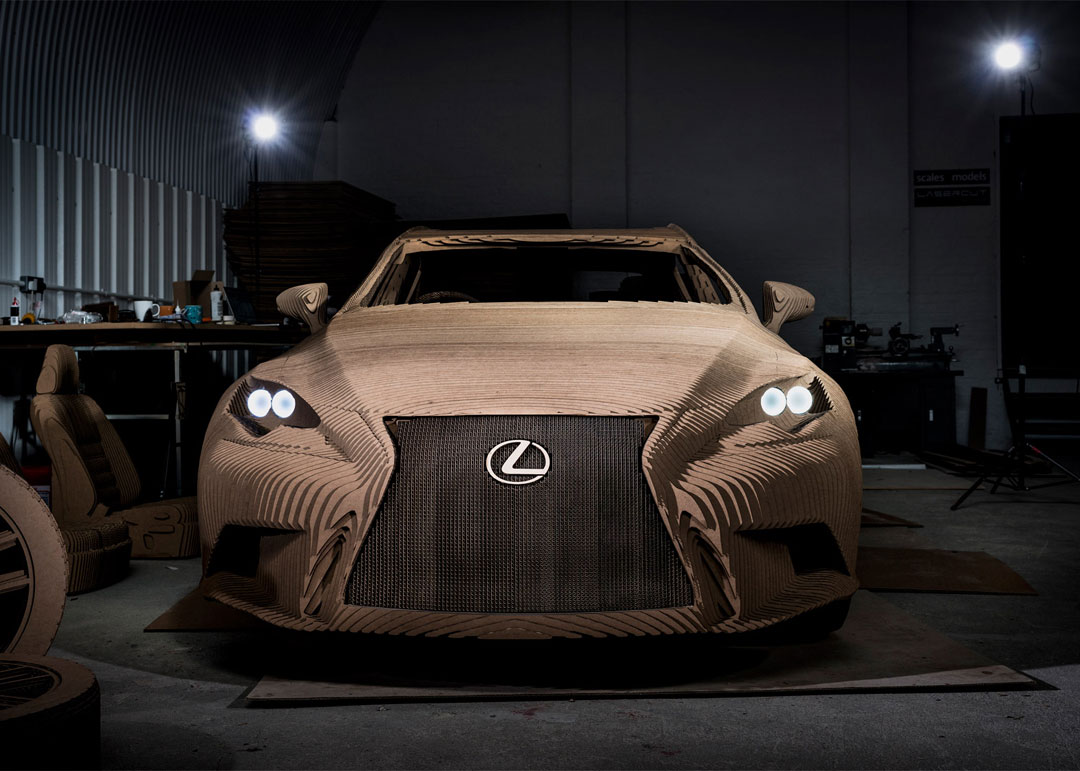 Like the contour lines of a map, the car’s every detail has been computer scanned and divided into segments, which are then translated into reality via laser-cut sheet cardboard. Each sheet has been painstakingly fixed together, while a robust subframe supports an electric motor to provide locomotion. 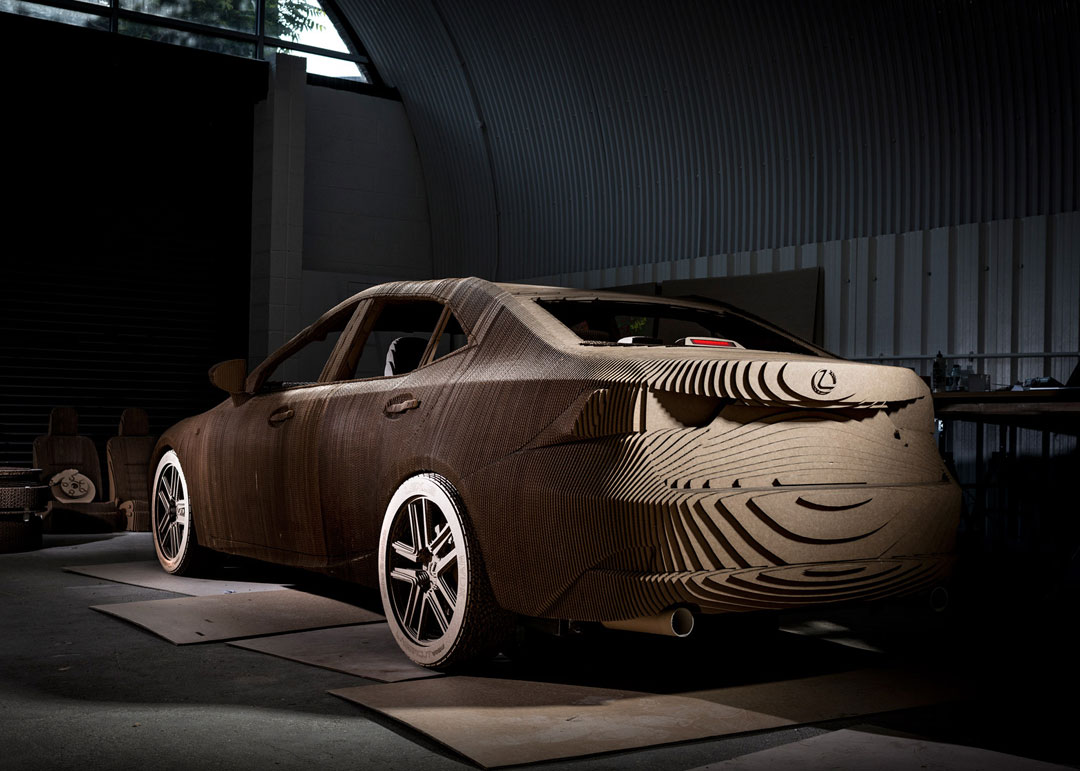 The project’s scale and complexity meant its creation was an unprecedented undertaking for LaserCut WORKS, and Scales and Models, two London-based specialist companies with extensive experience in the design and creation of prototypes, architectural models and bespoke commissions.

How it is made is by far the most fascinating aspect to all of this. 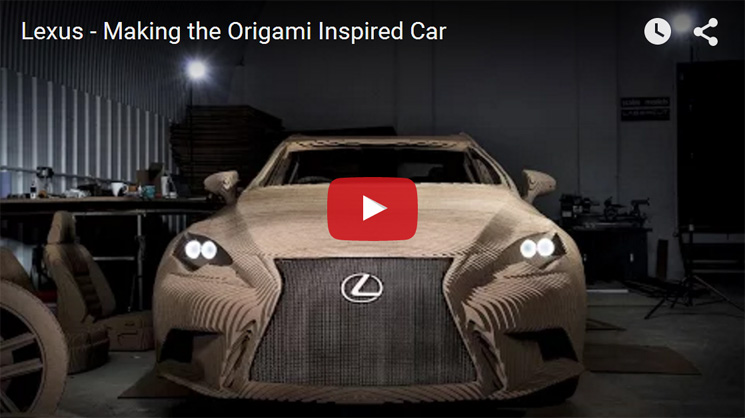 Behind the scenes of the making of the Lexus origami car. Click to play the video

Scales and Models company founder and director Ruben Marcos explained:
“This was a very demanding job, with five people involved in the digital design, modelling, laser cutting and assembly. Just like Lexus, we were committed to producing the best possible quality.” 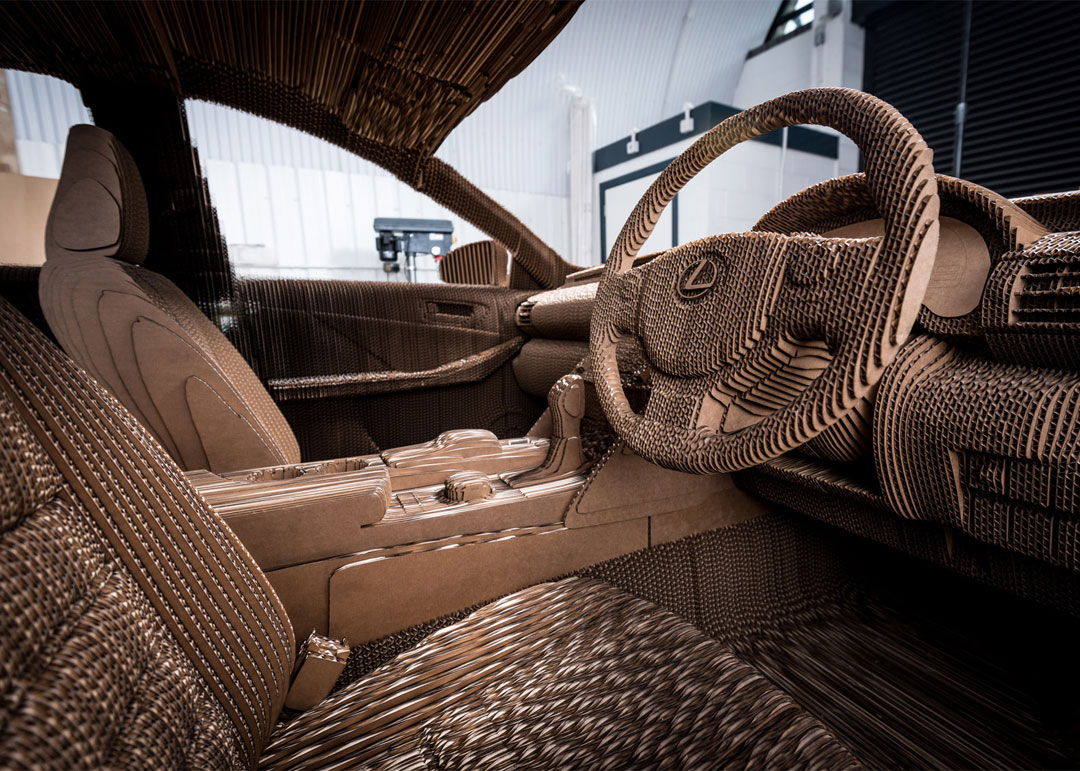 The creative process presented the team with a series of tough challenges: “The seats took a few attempts to get just right and the wheels required a lot of refining. Once we could see the physical pieces taking shape, we could identify where we needed to make improvements – as with anything, there were some elements of trial and error, but as we had all the resources we needed in-house, this made the changes easier to produce.” 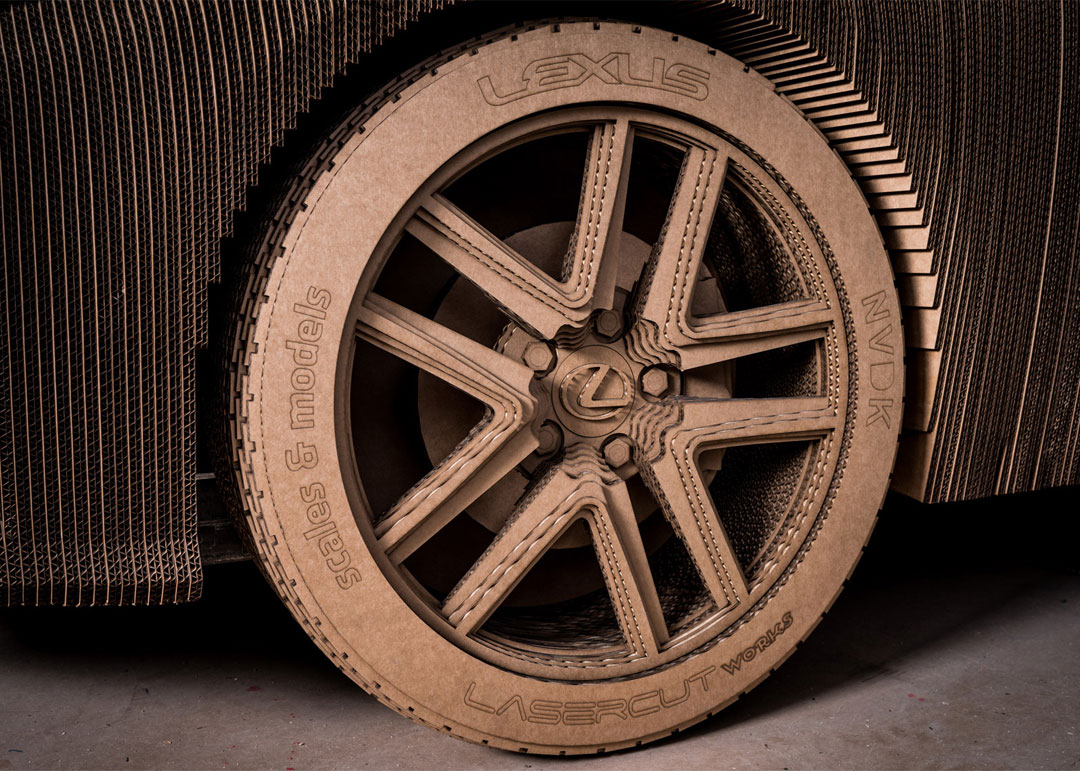 Lexus provided the team with a digital 3D model of the IS, which was then divided into a series of principal parts, such as the main body, dashboard, seats and wheels. These were then digitally rendered in 10mm “slices” to provide the two-dimensional profiles needed for the laser cutting of each of the 1,700 sheets of 10mm-thick cardboard – supplied by packaging expert DS Smith. 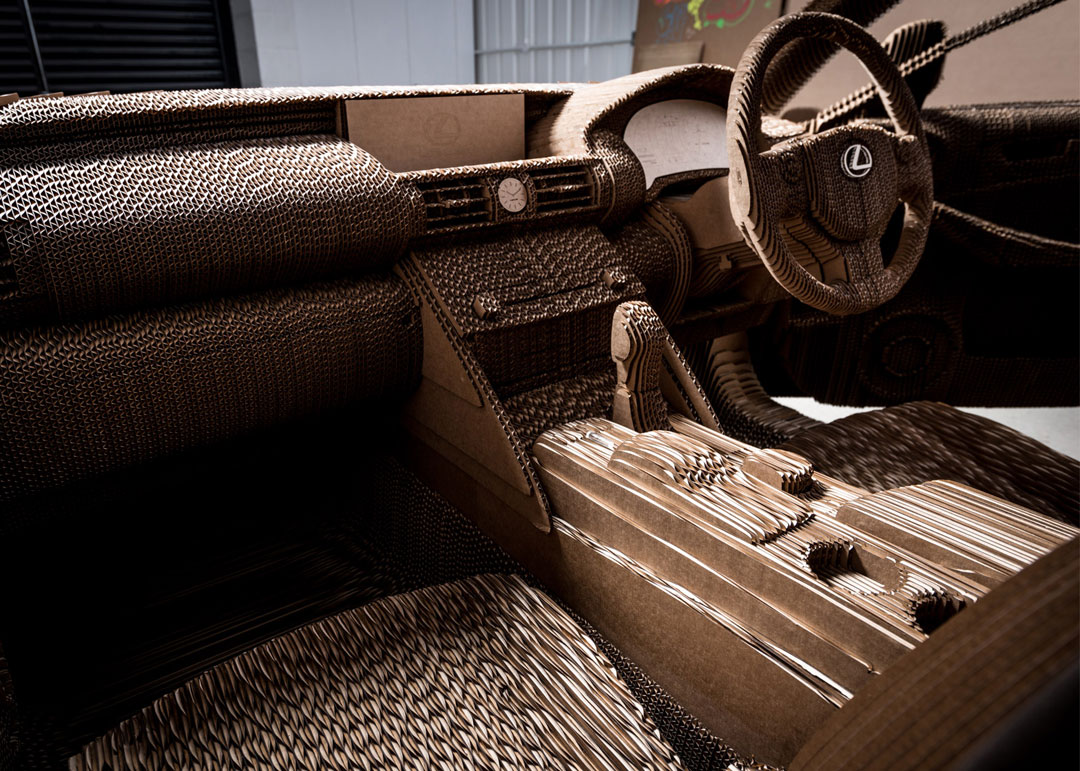 Each layer was given its own reference number to help ensure it was assembled in the right sequence and the entire assembly was done by hand.
A water-based wood glue was used, which had to be left to set for 10 minutes after each application.

Accuracy was vital, as changes couldn’t be made once the glue had dried. 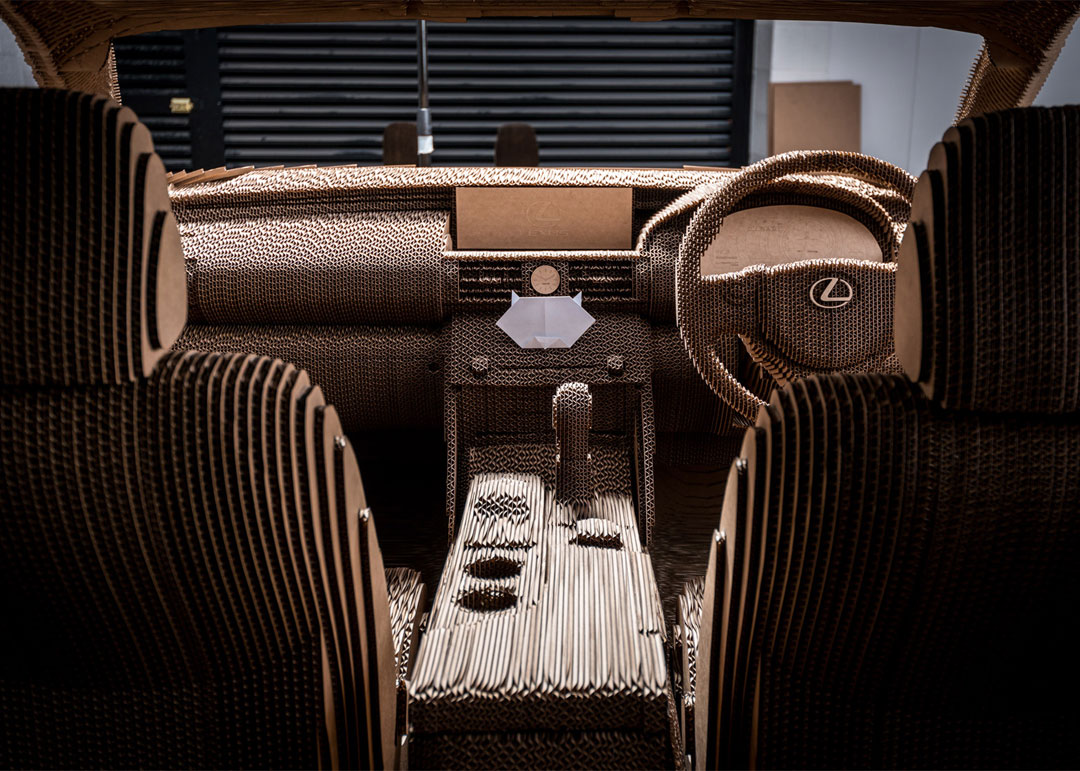 The end result is certainly cool. Daniel Ryan, of LaserCut Works, aptly describes the effect as a "crossover between animation and reality."
There is a dreamlike quality to seeing a familiar form in an unfamiliar texture. And the project shines a much-deserved spotlight on both his company, and Scales and Models. 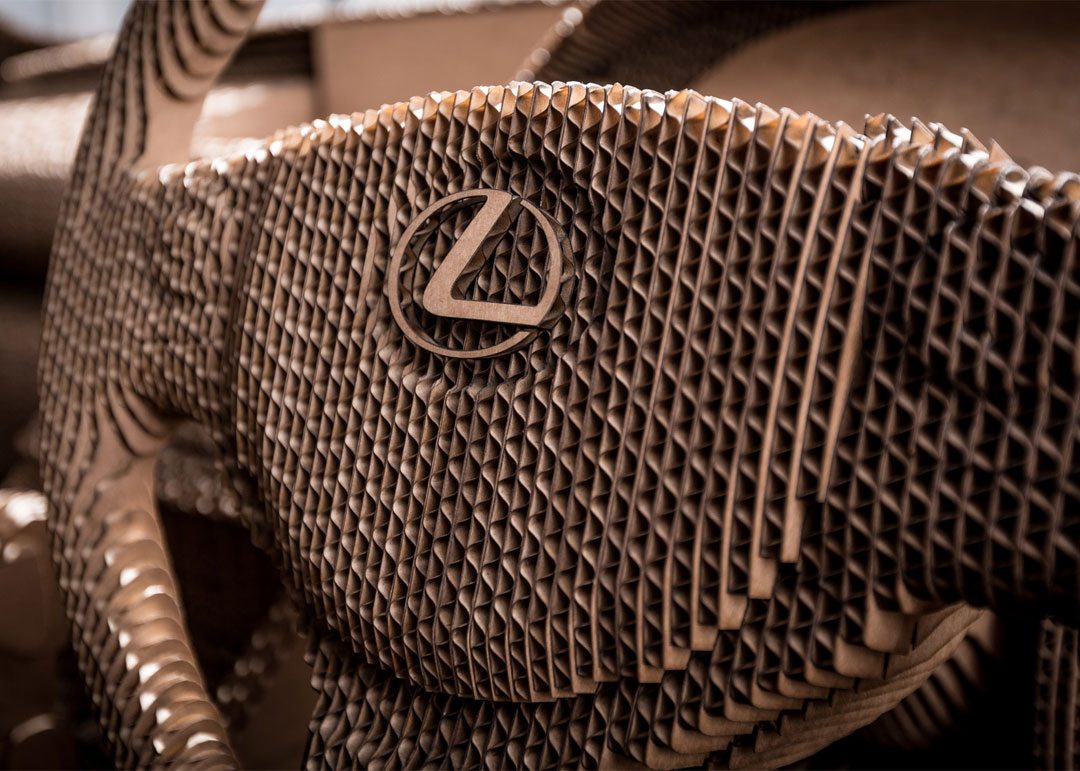 In all, the Origami Car took three months to build.