Today our local Nelson mayor Aldo Miccio came by to tackle the Prius Challenge.
He was quite keen to let everyone know just how green he is when it comes to driving, but got a little distracted and somewhat excited by the shiny white Lexus ISF V8 parked beside the little eco Prius C in the showroom before we left. His true colours when it comes to cars perhaps are not so much Prius green but Italian racing red? 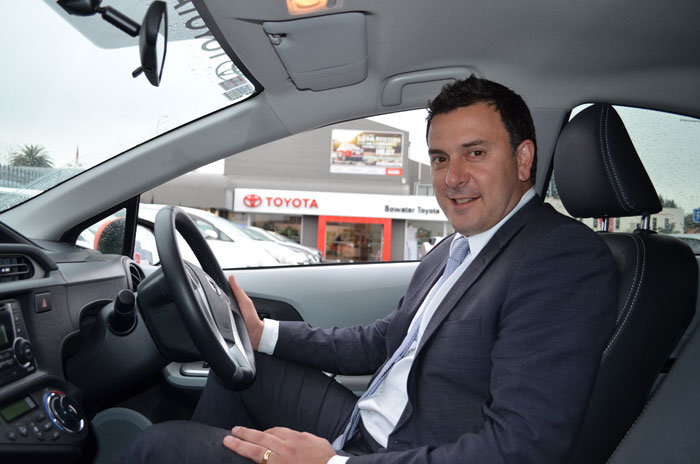 The conditions on the day were not the greatest for posting a super eco score - the heavy rain meant we had to use the windscreen wipers, lights and demisters on both the front and rear windscreens, so he was up against it from the start.
So how did Aldo do in the Prius Challenge?

We spent some time looking at the Lexus ISF V8 sports car in the showroom waiting for the rain to ease a little before deciding that it was going to be rain or after school traffic to content with. Either way these factors would negatively affect Aldo's ability to post a record breaking score.
As it turns out Aldo is quite competitive, so he wanted to give himself the best possible chance. Plus he seemed to quite like the V8 ISF and talked about an upgrade from the mayors car he has at the moment. Pretty sure he was joking. Not sure what that council meeting would go down like, but we are sure he would get to his appointments very quickly!

We headed out into the traffic and the rain at 2.49pm, giving us a short window to get the job done before we got slowed down too much by the school run. 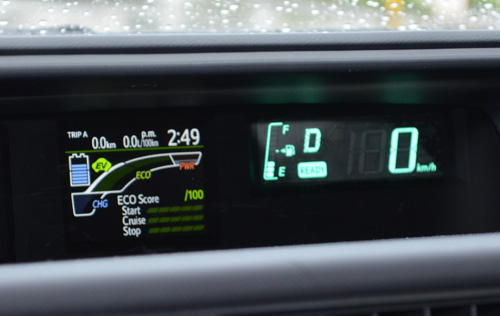 During our drive we talked about the future of fueling our cars, and all of the work that Toyota especially are putting into hybrid technology. With EcoFest just around the corner the "eco" way of doing things is front of mind with quite alot of locals. Part of the reason we have been doing these Prius Challenges is to get people talking about the choices they make when it comes to driving.

Whilst we would certainly love for large amounts of people to flock to our dealerships to snap up some great deals on the Prius family of vehicles, if we can get people thinking about how they are driving as well, then we are playing our part in the conversation about reducing fuel consumption, vehicle emissions and the cost of us collectively as a society going about our business day to day. What the Prius Challenge is showing us time and time again is that if everyone just slows down just a little then our fuel consumption could be almost halved. 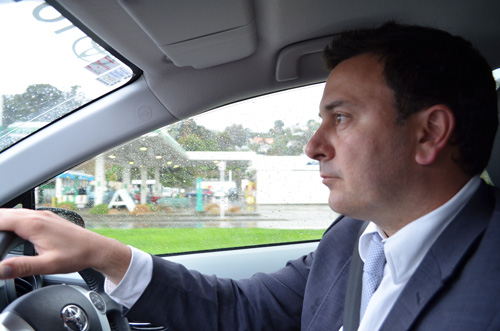 For Aldo this was quite a challenge as he is understandly quite a busy man, and his end time around the course reflected this. He rocketed around in 14 minutes. Most take 16-17 minutes, Nick Marer the 2.5L/100km legend took his sweet time and also took 19 minutes. Being the highly competitive man that he is though, Aldo took to the task at hand with gusto, and concentrated on what was required even with the unfortunate mix of weather and traffic factors.
His score, a very respectable 3.7L/100km, almost exactly half the fuel consumption of a Toyota Corolla hatch. 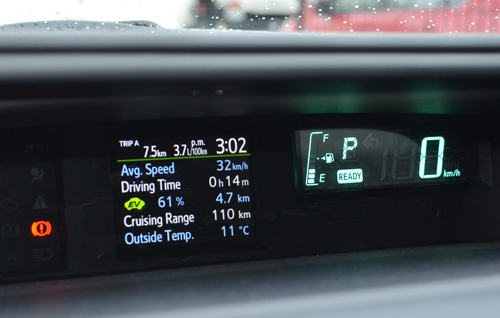 Aldo managed to extract great EV (electric vehicle) use at 61% of the total distance covered, but the conditions on the day meant he had to sacrifice some EV use to maintain battery charge. It would be interesting to do this again on a fine winters mid morning, the thinking here is that he would be able to easily go under the 3.5L/100km mark. Even so this score puts Aldo 7th overall on our leader board so well done to him! 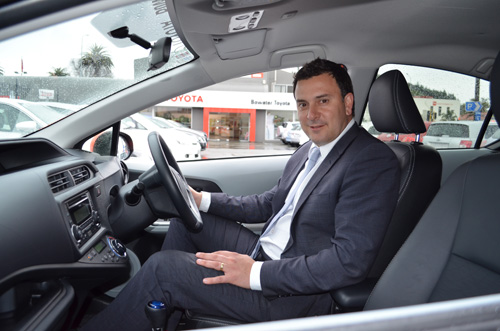 Later in the week we give Tasman mayor Richard Kempthorn the chance to respond. Aldo has also put his hand up to be a test driver for the new Toyota 86 when it arrives later in the month - we might just hold him to this and see just how good he is at the other end of the driving spectrum where being green is a condition brought on by excessive speed at cornering!