The Bowater Motor Group attends the AVAAZ Global Climate Change March with the intention of driving change in our area. 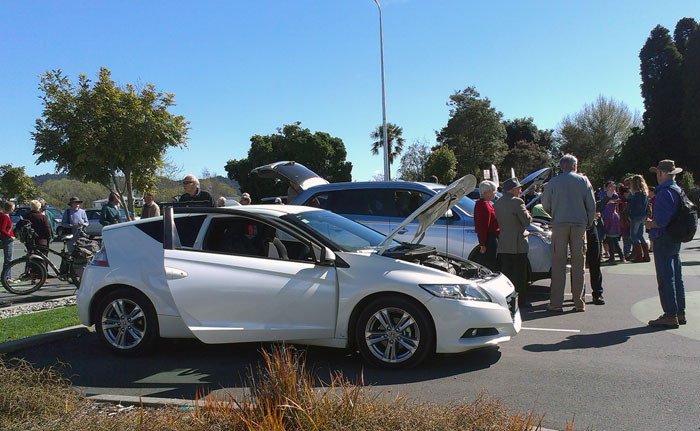 Bowater Honda came along with their hybrid petrol / electric sports coupe the Honda CR-Z - who ever said responsibility needed to be boring!

The Bowater Motor Group are realists.
The climate is definitely changing around us and there is a growing groundswell of people wanting to do something about that. Bowaters are all for that, and the technology now exists for passionate people to take a greater degree of responsibility for their own collective emissions and carbon footprints through the choices they make in their own personal transportation options.

Last weekend the world got together to bring attention to the fact that climate change is impacting now not only on the planet, but also on each and every one of us on an almost daily basis. The weather is more extreme, and new costs are beginning to be felt as commoditites are starting to be priced on not only the cost of actual production, but also the environmental costs of the manufacturing process as well.

The Top of the South was well represented in the AVAAZ Climate Change Campaign - joining around 2000 other locations globally, and hundreds of thousands of people around the world on 21st September, to come together and draw attention to the problem in the lead up to a major G8 Climate Change Summit by major heads of states next week. 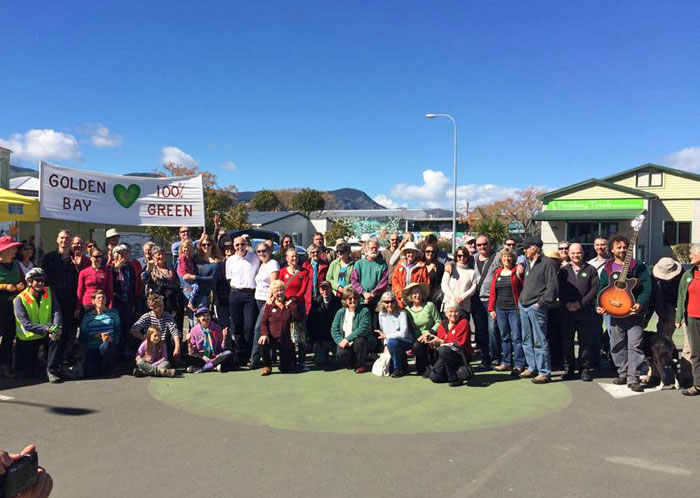 The locals of Golden Bay decided to do things a little differently for the Global Climate Change March - they drove!

Golden Bay is one of the most engaged populations per capita when it comes to environmental causes, and lifestyles based on a certainly level of consciousness about self responsibility regarding personal impacts of each of us. A group of people that by and large are prepared to walk the talk. There was a good turnout with a really active bunch of locals wanting to make their collective voices heard. What was interesting about the Golden Bay version of the Climate Change march was that it was all about Hybrid cars, and this is where the Bowater Motor Group fitted in as guests of the organisers.

Making an impact by lessening your impact.

Automotive technology has come a very long way in the last decade. We can all purchase state of the art brand new hybrid petrol / electric vehicles at a starting level of around $30,000. The ranges and choices are all there for all sorts of requirements, and with each month there is another refinement of technology and it's availablility on our very isolated shores.

This is where we can all make a difference. Cars are a reality of everyday life, no getting away from that fact, but what we choose to drive, and how we choose to drive it, is what really makes the difference. This is part of the excitement we felt at being invited to attend the Hybrid Rally - the chance to spread our message further and wider. Toyota, Honda, Hyundai and Lexus are all putting alot of resources and emphasis into the hybrid cars of the near future as we transition through the infancy of technology based around alternative, non-fossil fuel sources. Currently electric vehicles have range and repowering issues, and hydrogen fuelled vehicles are infrastructureless in this country. It is these aspects, as well as a couple of more technical ones, that make the transition through petrol and electric hybrid a vital step in the process.

Representatives from Bowater Honda and Bowater Toyota had no underpowered fears or range anxiety as they tackled the hill and headed to the Bay for the day. This is one of the real bonuses for petrol electric hybrids and the part of NZ we live in - with long distances and some quite challenging hills to content with, the mix of the two energy sources really works. 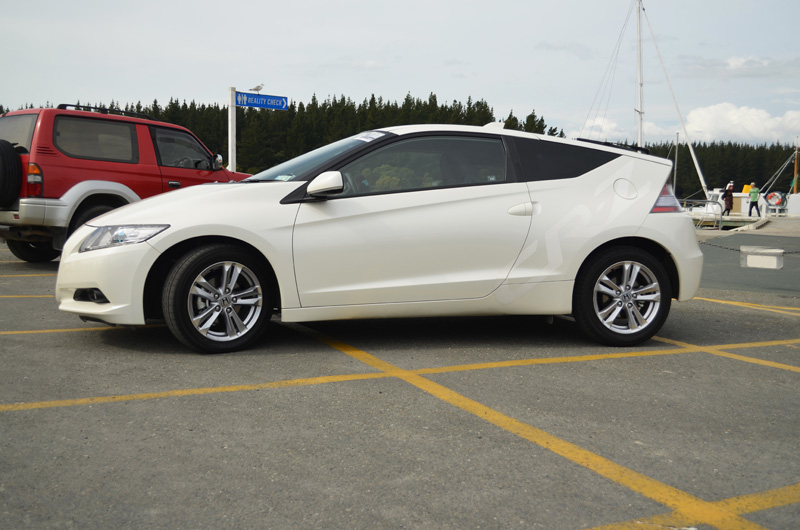 The fun and frisky Honda CR-Z sports coupe at a quick coffee stop in Mapua.

Motivating change. The coming together of a community.

The whole concept of the rally was quite quirky, and thoroughly in keeping with the purpose of the day of Global Climate change awareness. There is no escaping that cars are here to stay, and will be used by almost everyone. What we can do over time is to replace our current vehicles with more fuel efficient ones, and eventually, if this is a reality financially for you, to move into a hybrid. There is already quite a healthy used car market in older hybrids, but it has really been a huge growth segment over the last two years with car makers like Toyota and Honda releasing more and more hybrid variants on existing models. 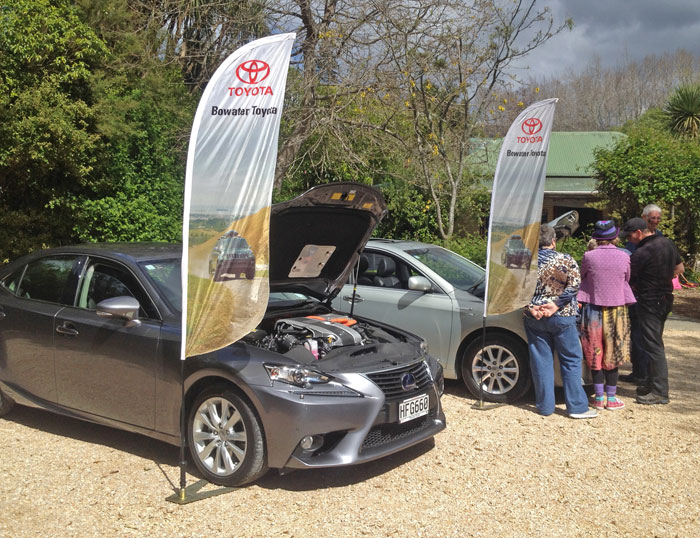 The striking Basalt Mica Lexus IS300H - state of the art hybrid technology, driving technology and ultimate luxury all rolled into a very attractive, and affordable package.

At the same time, thousands of petition deliveries demanding 100% clean were held in more than 88 countries, from London to Lagos, and Geneva to Golden Bay.

The Golden Bay Electric/hybrid Rally looked at vehicles as a transport solution for the future based on those that are here today and was supported by enthusiastic current owners who wouldn’t go back to purely petrol power. The idea that the motor trade and “Greenies” could share common ground on this topic seemed almost a contradiction but everyone is coming to the realisation that this is the viable, workable, everyday choice for the immediate future. 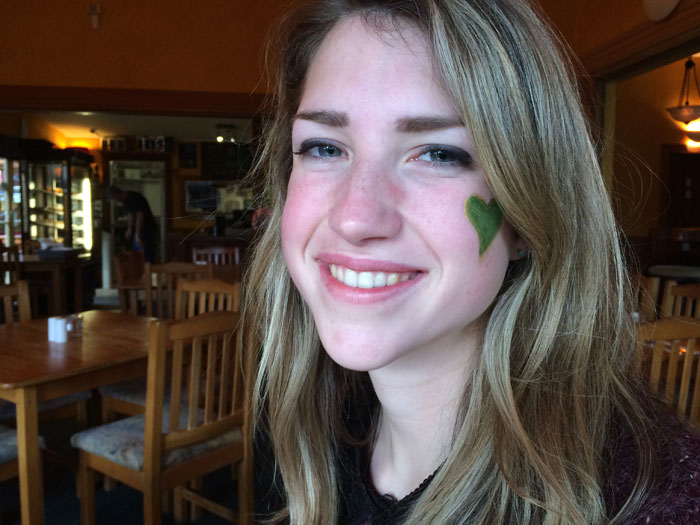 Giorgia Webster came along prepared to make her voice heard.

Part of the focus on this Golden Bay Hybrid Rally was the presenting of a petition to the local Tasman City Council representative requesting that they consider hybrid vehicles the next time a fleet purchase came up.

The sales team from Bowater Honda was not to be left out of this opportunity to connect with the Golden Bay locals by taking along the fun and funky 2 door sports coupe, the Honda CR-Z, which is also surprisingly a hybrid as well as being a whole lot of fun! Also in the Honda range is the Honda Insight, and one presumes a new Honda Jazz Hybrid to replace the current outgoing model.

Bowater Honda saleswoman Sheryl Wearing, said "it was great to be over in the Bay, sharing information on hybrid alternatives and opening people's eyes on just how easily affordable switching was" She also commented that the level of interest was huge, with alot of people seriously interested in having further conversations about making a change to the vehicle they drive to reduce their impacts and feel a whole lot better that they were part of the solution, rather than being part of the problem.

The Hybrid Rally left the Takaka Library, with local inventor Albie Burgers all electric DIY 1988 Diahatsu Charade in the lead - proving once again that alternative technologies are workable. 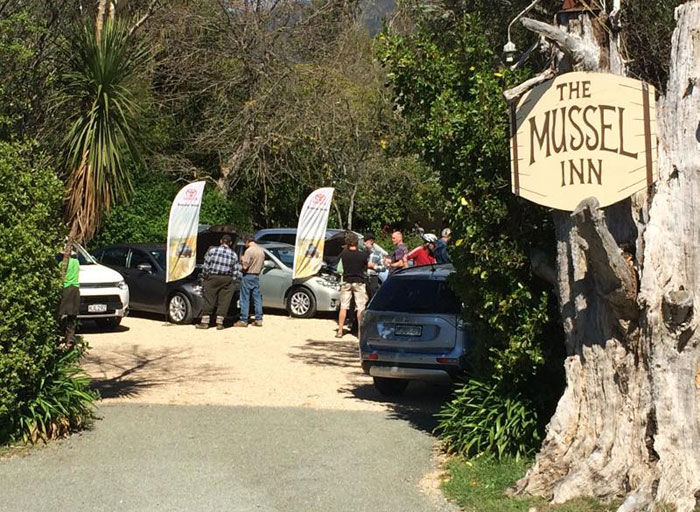 The ride in the modern hybrids were 'slightly more luxurious', whilst consuming a tiny amount of fuel for the journey.

As Bowater Toyota's Finance Officer Andrew Maitland said "the Lexus IS300H was amazing. The information display gave you real time statistics on how you were driving, and it quickly became apparent the more consistantly I drove, the less fuel was consumed as the electric engine kicked in more often and drove down the petrol consumption remarkably. The radar cruise control did a superb job of maintaining a steady and smooth safe distance from the vehicles in front, again saving me fuel as the management system made smart decisions a lot faster than I could"

It was a risk taking a large powerful luxury sports sedan to an environmental event, but as Andrew pointed out "it certainly got people talking and as I discussed, it is this leading edge technology of state of the art cars available right now, that become the mainstream features of smaller cars in a short time." 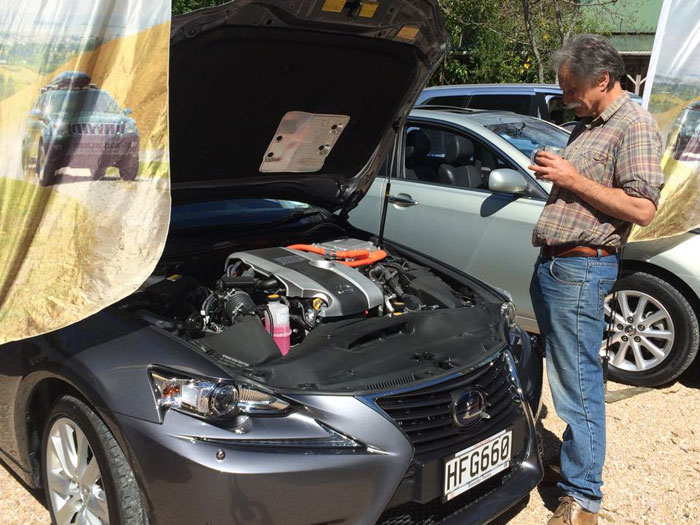 The first-ever hybrid in the Lexus IS line combines a powerful electric motor with a newly developed 2.5-liter Atkinson-cycle petrol engine to deliver full hybrid exhilaration. Click here to go to the Lexus website about the IS300H

Toyota have a range on offer with the Prius family (the compact Prius C, several models of the Prius and a larger 7 seater Prius V), the Camry Hybrid for the eco minded executive or company with a greener footprint, and many more on the immenent horizon with the possibilities of the arrival of several models that exist in other markets (the USA for instance) like the Highlander Hybrid, The RAV EV (all electric vehicle), and the Yaris Hybrid.

Bowater Toyota attended the rally with a couple of vehicles to showcase the very wide variety of options now available. Steve Webster and Andrew Maitland tackled the hill and headed to the Bay to show the locals both ends of the sedan spectrum, with a Toyota Camry Hybrid and a luxury Lexus IS300H sports sedan. 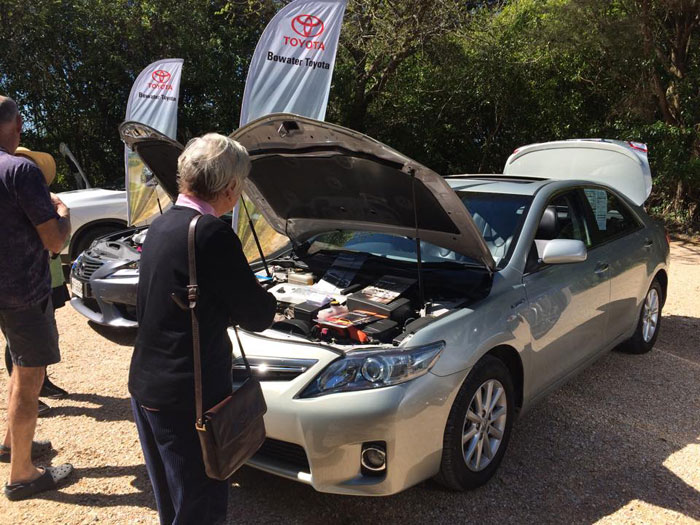 The Toyota Camry Hybrid - proving that a conventional family or executive sedan can also be a greener choice with remarkable fuel economy of 5.2L/100km at a starting price of just $50,990.

Click here to see the Global Wrap Up of the event from the AVAAZ website - it is quite moving to see so many people so passionate about their future.

At the same time, thousands of petition deliveries demanding 100% clean will be held in more than 88 countries, from London to Lagos, and Geneva to Golden Bay including a Hybrid Car Rally right here in the Bay. Electric/hybrid vehicles as a transport solution for the future are here today and supported by enthusiastic consumers who wouldn’t go back to purely petrol power. The idea that the motor trade and “Greenies” should share common ground is almost a contradiction and yet the motor trade is supporting this call to action on climate change.

At 10 am residents and visitors of Golden Bay will gather in Takaka Library Car Park to marvel at Albie’s Car that runs on only sunshine. Then to drive in electric/hybrid vehicles to the Mussel Inn to deliver the million­ strong call for a 100% clean future.

The Golden Bay event will also feature music, face painting and probably refreshments, making it an event for all the family.
< Prev Next >