The BMG Cancer Society Mini restoration is entering the next phase of work, getting ever closer to completion. The Bowater Motor Group are very pleased to be able to support them through this journey with the sourcing of parts needed, at no cost to the Mini Restoration Team.

Article taken from the Nelson Mail.
Written by Adam Roberts. 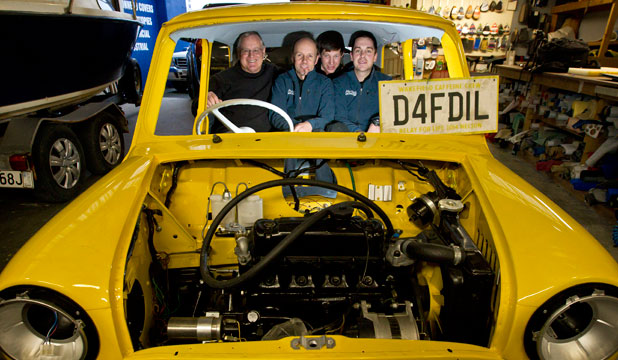 Photo: ALDEN WILLIAMS/ Fairfax NZ
Retired mechanic Bob Croy, left, with Ian Mortimer, Mitch Hewson and Caleb Hill of Mortimers Auto Upolstery in Richmond, in the mini they are restoring to raffle at next year's Relay for Life.

With a new coat of paint coloured Daffodil Day yellow, and the numberplate D4FDIL to match, it is clear this is a Mini with a message.

The Wakefield project to restore a 1975 Morris Mini Mark 3 to raffle for the Relay for Life has moved in leaps and bounds since it began last year.

Fresh from a panelbeating and paint job at Sun City Panel and Paint in Nelson, it is now at the upholstery installation stage.

The idea for the project came when retired mechanic Bob Croy and his friends were recovering from last year's Relay for Life, and discussing how they could raise even more money for the Cancer Society at the 2014 relay.

Croy paid $750 for the Mini, which only had two previous owners and had done less than 58,000 kilometres. He hoped to raffle it for as much as $20,000 once it had been restored.

Businesses and community groups have all chipped in with donations of goods and labour.

Now the car is at Mortimer Auto Upholstery in Richmond to have vinyl upholstery installed.

Co-owner Caleb Hill said his company became involved through the owner of Sun City, who recommended them to Croy.

"As a business ourselves, we're always looking at integrating into the community to help out. We thought this here would be a good opportunity to be able to do that."

Cancer was something that affected a lot of people, and recent experience had reminded him of that. His father in law, Bob Coad, died last week from multiple myeloma.

"It's got a whole new meaning now. It was very sudden."

He hoped to have the upholstery completed within the next week to keep the project moving to its end-goal: "Raising lots of money for this swine of a disease."

They were using all vinyl upholstery, which would usually cost about $3000.

Co-owner Ian Mortimer said he had two friends who were going through chemotherapy, and a relative who was going through a cancer operation.

Croy said he expected the car to be completed in September, and the raffle to begin in November. The law prevented them from raffling the car for longer than three months, he said.

Richmond House of Travel has donated a weekend trip for two to Sydney as the second prize in the raffle, and Awaroa Lodge has offered a weekend's accommodation as the third prize. Support has grown enormously since the project began.

"I have had people calling up from Blenheim, calling up and wanting tickets. We have even had people telling us that if they win it, they would give it back to us to raffle again."