HomeBMG Mini for Nelson Cancer ProjectThe origins of a special charity project - why rebuild a mini?

Local retired auto mechanic Bob Croy and his team have a grand vision - to rebuild an old mini and auction it off for charity, with all proceeds going to the local Cancer Society. The project started as all great projects do, out of a competitive spirit to do more.
Bob got a couple of mates together and came up with a plan, to find a couple of old minis, strip them back and use them to rebuild a new one. This would then be auctioned off for the Cancer Society. Sounds like a great plan.
The start was always going to be hard, finding old minis is increasingly difficult, but they got there in the end. 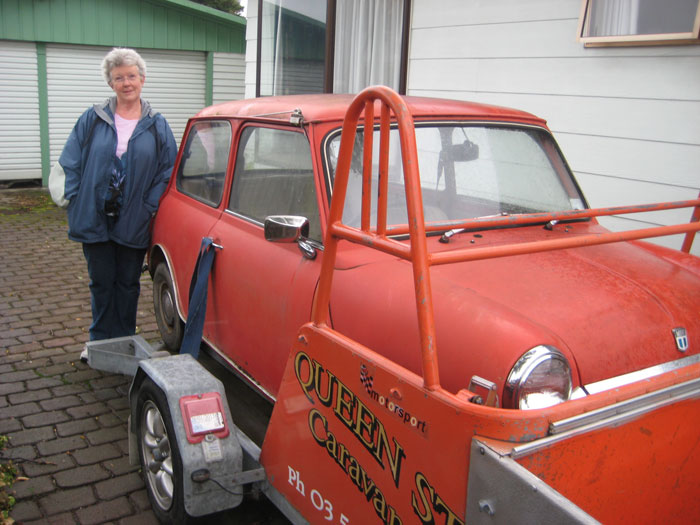 The first mini was found and kindly sold to the project by Mrs Christine Johansson.

Bowater Motor Group  have since come on board, with Bowater Toyota sourcing and supplying all of the parts needed to complete this admirable feat. We talk to Bob Croy and get the inside story, as well as the first set of pictures as the car is found and the dismantling begins.

BOB CROY: "It all started after we had finished the Relay for Life for which our Wakefield team have raised what I thought to be a commendable $2500 only to be well out done by another team to the tune of some $6500.
That got me thinking and I asked our team what could we do to raise $10000?
Nobody had any ideas but I recalled the Nelson Rotary raffling a Morris Minor the year before and then I hit on the idea that we should procure a Mini and rebuild it back to new condition and raffle it. Lynne and I would finance it and get our payback from proceeds from the raffle. Easy, I have the mechanical skills and with some enthusiasts in our team we were up to the challenge.

I ran the idea past a number of friends and Linda Lucre at the Cancer Society and they all thought it a commendable idea. So now we needed a car to carry out the project.
I spent a lot of time on Trade Me but to no avail. We heard about two cars in Takaka so we went over there and did a deal for the two of them which I was sure we could get enough from to make one. That evening I received a call from the folks to say the deal was off as there son had sold them on Trade Me for $1350; a lot more than we had done the deal on. It wasn't meant to be.

I then got in touch with the Nelson Mini Club president who after a long yarn told me of two cars that the owners would not sell and gave me the addresses so as I could try my luck.
I visited the house on the Wednesday and it looked just what we wanted so I left a note for the owners to phone me. By the Saturday morning I had heard nothing so I proceeded to go back to the house and hope someone was at home. I was in luck they were at home. I introduced myself and explained what I was about and what I wanted. That was that I wanted to buy the Mini from them rebuild it and raffle it for The Relay for Life and donate the money to the Nelson Cancer Society.
Mrs Christine Johansson thought it a worthy idea and asked me to make her an offer to which I offered her a fair price of $750 which she accepted with no hesitation. Her husband Ian then told me that they owned Precision Regrinds and so I had my first sponsor. I also found out that the car was a one owner car and that she had bought it from Vining and Scott Ltd in July 1975 and that it had only travelled approx 55000km and had never had the head off the engine!
I paid for the car and picked it up that after noon. The following day after a fair bit of tinkering around I managed to coax it into life and took it for a short drive – seized up brakes and all.
We gave the car a good wash inside and out as it had been sitting out in the weather for nine years. Surprisingly it cleaned up pretty good with no more rust showing than before we started.

At this stage my team of Martin Reid, JB, John Bruce and Dal Stewart ,all Wakefield folks, started meeting on a Thursday morning and preceded to dismantle the car down to the last bolt.
This took about six weeks in all, a lot bigger job than I had first envisaged.

About this time I had a call from Linda Lucre to say that she had been talking to Tony Bowater and he had told her that BMG would look at coming in on the project to help with parts, but he wanted to talk to me first. I rang him and organised a meeting the following week with Tony, Linda, Martin and myself. We met in Tony’s office and after I explained our plan he said that he had already had a board meeting and the board had given him the thumbs up to proceed.
The deal was that we give them naming rights and to have the car in their showroom for some time after we had finished it and they would supply ALL parts. That is all hard parts, Wheels, tyres brakes clutch etc etc. This was a huge boost to us as you can well imagine.

About this time I got in touch with the Nelson Mail and arranged to do the first story to let folks know what we are up to. It was decided to do a regular article so as to keep the readers up with what is going on. This was done and since then there has been three articles since we started. The outcome of these articles has been amazing as we had offers of help from all directions.
We took on Chris Tonkin (an auto electrician) and Glen Thompson (a panel beater) - he will assist Nick Harrison with the panel work.
At about this time I approached Tony Johnson from Sun City Panel and Paint Ltd and he had already decided to help us in fact he had arranged one of his paint supply companies to supply $2000 worth of the best of paints to do the job. I then approached John and Wendy Ross from Hot Water Blasting Ltd to see if they would like to do the sand blasting required and came away with a resounding yes. So at this stage we are well on our way.

The car and most of the suspension components have been sand blasted or primed with the suspension now ready for assembly, as Bowater’s have supplied the first delivery of parts being mostly suspension, brakes and gearbox bearings and syncro ring kit.

We then decided that we needed a trailer to transport the car around when we start promoting the course and with that I set out to find some sponsors to supply enough materials. Young’s Automotive have supplied the hubs stubs and wheel bearing kit, spring, tow hitch and jockey wheel and all of the  electrics that are necessary for a WOF. Fletchers Steel promised and have supplied the steel and ITM the plywood for the base. I managed to score a 5l pot of stain for the ply from Resene in Richmond Colin Ryder another Wakefield fellow then offered to build it for us and 88Valley Engineers  also supplied their knowledge and steel. Hot Water Blasting Ltd will sand blast the trailer frame and then paint it. It is not all that far from being completed. No cost to us and we will sell it after the Mini has been raffled. More money for Cancer Society."

The Project sponsors to date are: