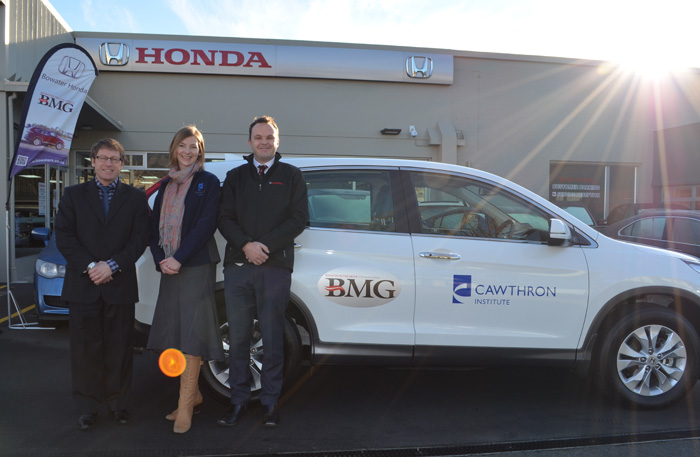 Bowater Honda, and the wider Bowater Motor Group in general, are very passionate about supporting our community.

The easiest way we can make this happen from our perspective is to help provide transport solutions to these organisations. A key part of any community education programme is actually getting in amongst the community and delivering educational resource and conversation where the community actually is.

Bowater Honda recently delivered a multi purpose Honda CR-V to Jo Thompson, the Community Educator for the prestgious Cawthron Institute. Bowater's are not only commited to supporting community groups, but also those in the community such as Cawthrons, delivering invaluable and positive interactions with all aspects of the community, and in particular the youth of our district.

Back in February 2011 the Cawthron Institute saw the need to support schools and the wider community in general, at events such as open days, and talks all across the top of the south. They established the Community Educator role to fill that void, and began to connect their research and scientists with the wider community, and looked to support existing science programmes in our region. and especially begin to actively engage with groups such as the local schools.

Cawthron's community education programme was established in 2011 to connect our research and scientists with the wider community, and to support existing science programmes in our region.

Bowater Honda came onboard at that initial early stage, sponsoring the institute with a Honda Civic. Now almost 3.5 years later, the Cawthron Institute are now receiving a remarkably functional and multi purposed Honda CR-V to replace the Honda Civic as this exciting programme expands and is increasingly utilised. They have been doing alot of work in schools, going in and running teacher training workshops, helping school science departments experience state of the art, up to the minute science at an easy to access level.

The local Nelson public are also very keen to understand exactly what the Cawthron Institute gets up to, especially as it is all going on right at our collective doorsteps, and we are being exposed to conversations from the Institute more and more in the local media and from our children.

One of the initiatives Jo was keen to talk about was the TasCam bouy out in the Tasman Bay. They have developed a freely available Smartphone / Tablet App which relays realtime data as to what is going on right now in Tasman Bay - what the sea temperature is doing, the state of the salinity, which algae is present and in what sort of numbers. This has a real world impact as it can literally tell fishermen what sort of fish, and in what numbers they can expect to be out in the bay. These kinds of initiatives go all they way through the community and into schools. If the teachers have got access to technologies that are going to assist in their teaching and make it easier then it is a win win for all involved.

The Community Educators, Jo and her associate, are in a lot of ways the public face of the Cawthron Institute. They see their roles as vital, as they represent the entire Cawthron Institute and do wonderful work in sharing some of the exciting developments from departments that would ordinarily not create much public interaction.

The Cawthron Institute has a long and intertwined history in Nelson. It is New Zealand's largest independent science organisation, offering a broad spectrum of services to help protect the environment and support sustainable development of primary industries.

They work with regional councils, government departments, major industries, private companies, and other research organisations throughout New Zealand and around the world.

Cawthron Institute was established in 1919 by the last will and testament of Nelson philanthropist Thomas Cawthron who had a vision – that science could contribute to the growth of a young New Zealand.

Since the beginning they have firmly focused on research that contributes to the economic growth of New Zealand and the preservation of our special environment. From the 1920s onwards, their scientists applied their expertise to agricultural research to support the pipfruit and hop growing industries. Then, as timber exports took off, they progressed to forestry research.

Today their science is strongly focused on protecting marine and freshwater environments, and supporting sustainable development of the dairy, seafood and aquaculture sectors.

This pragmatic approach has worked for Cawthron Institute, and the industries their research has underpinned, for over 90 years.

You can visit their website by clicking on the link:  http://www.cawthron.org.nz