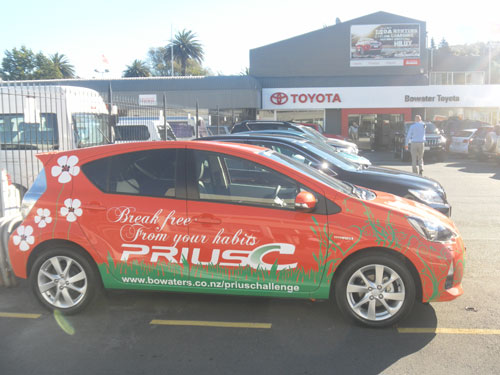 From today, and for all of May, we invite you all to take the Toyota Prius Challenge.
It is very simple, and will only take 15-20 minutes of your time, but may change your driving habits forever!

The all new 2012 Toyota Prius C is the newest member of the most fuel efficient vehicle range on the market. The Toyota Prius C is compact, very efficient, very economical and very affordable - it is the cheapest hybrid you can buy and very comparable to other compact car prices. Come down any day between 12-3pm to take the challenge, and see just how easy it is to be a little greener each & every day, whilst saving you money at the same time!
Click here to learn more about the Prius Challenge. 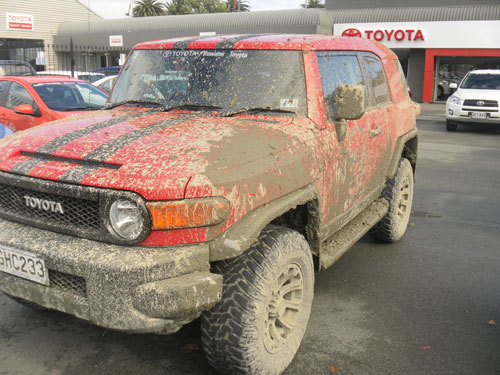 This week we were getting the Toyota FJ Cruiser all ready for it's big trip down the West Coast as a support vehicle for the Westport Challenge.
The FJ got all polished up ready for pickup on Friday afternoon, even after we had told everybody that we were going to take it out for a test run to get some footage before the event. I guess no one believed we would get it all dirty.....

We ventured out to the best place you can easily go extreme 4X4 crazy - Happy Valley Adventures on the road to Cable Bay, just 15 minutes north east of Nelson. What happened next is pretty funny.

The Westcoast Challenge is a new event on the Off Roading calendar that Bowater Toyota are involved with, sponsoring a team made up of some hardened off road locals.
It is extreme off road 4X4 action involving a whole lot of mud, some winches and some very brave individuals pushing their vehicles to the limits.

The Westport Challenge is an extreme 4X4 event with teams of 3 vehicles competing over demanding tracks against the clock. bottomless bogs, over bonnet water, steep ascents and descents combined with often Wild West Coast weather make this event a feature for hard core 4 wheelers....

The competition is all set to start 28th & 29th April.

LOS ANGELES - At a glittering Hollywood fundraiser for a noble cause Tom Hanks hosted, Robert F. Kennedy Jr. spoke, former president Bill Clinton pumped flesh. But the real news was in the parking lot. Celebrity after celebrity rolled up to the valet stand in small, snub-nosed, rather drab little cars. Director Rob Reiner, Seinfeld co-creator Larry David and agent Arie Emanuel all arrived in Hollywood's latest politically correct status symbol: the half-electric, half-gasoline hybrid car-the Toyota Prius at 50 miles to the gallon, nearly emission-free and only around $20,000. "Five Priuses drove up in a row," said Gail Reuderman Feuer, a lawyer for the Natural Resources Defense Council, who drove her own hybrid to the fundraiser. "I said to my husband, 'I don't know if we're going to be able to find our car afterward.' They were all lined up. It was very exciting."