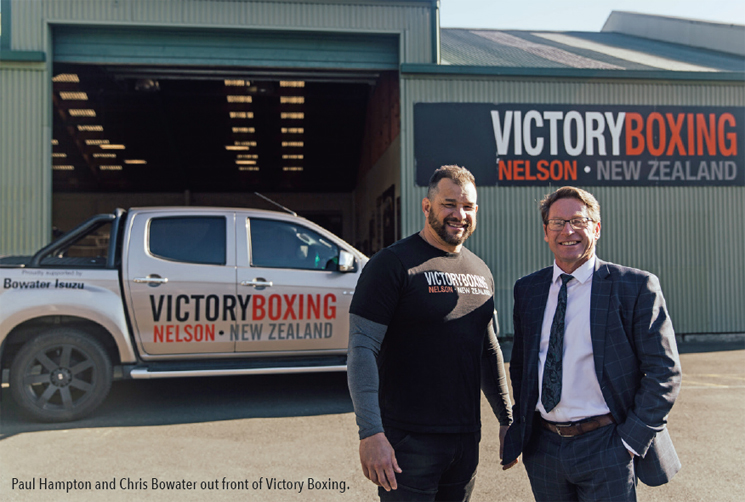 VICTORY BOXING, Nelson is doing some wonderful work in the community. Bowater Hyundai & Isuzu are proud to be standing strongly in their corner and helping them get out and about.

Paul Hampton turned from running a classroom to running a boxing gym and has poured his energy into
a project that he always knew would have the potential to change lives.

Several years on, the Victory Boxing gym is going from strength to strength and class sizes are swelling.

“At first it might seem that Victory Boxing is only about boxing, but it’s not really. It’s all about the kids – giving youth a safe and positive place to hang out, a place to get fit and develop healthy lifestyle habits, values and attitudes, and a place to be the best they can be.

We believe in the kids and that helps them believe in themselves. Boxing is the hook that gets them in the door, but our programme is way more than that.”

He was recognised at the Community Awards again this year, and he was recently invited to Parliament to
the 2017 Social Enterprise Summit where organisations share what they are doing in the community
to make it better; and is regularly invited as a guest speaker at various events.

He’s a busy man.
“It’s a team effort and a major part of Victory Boxing’s success is due to its very capable volunteers, who
are passionate about sports and the welfare and futures of our young people; they’re the backbone.”

“The gym relies heavily on the support of charitable funders, corporate and community supporters to fund our operating budget. Our fundraising event Fight4Victory is run every 18 months and this is our major fundraiser; this event assists in helping us to keep the cost of the programme accessible for the youth participants,” says Paul.

Chris Bowater CEO of Bowater Hyundai and Isuzu, stepped into the ring with the then Mayor of Nelson, Aldo Miccio in the inaugural Fight4Victory back in 2013 and has been a passionate supporter ever since.

“It’s locals like Chris who support us that makes it easier for us to deliver and we really appreciate his support.”

And then there’s the show Victory Boxing brought to town recently; “Shot Bro” is a show tackling depression head on, in a bid to “break down the barriers” of mental illness.

“There isn’t a day that goes by when I don’t get into a discussion with someone at the gym who’s in a rut,
and sometimes after a workout when they have the blood pumping, people often open up about how they are feeling,” he says.

“That’s the thing about mental health – it doesn’t matter who you are or where you’re at in life, depression can affect anyone.”

To show how diverse Victory Boxing has become since it started, the gym has also started a programme training people with Parkinson’s disease, with growing numbers attending these classes as well.

Whatever the gym’s future, it is clear that Paul Hampton lives his gym’s four-word mantra. It is set out on a
poster on the wall so all the kids can see it whenever they pass through the doors: “Responsibility, Respect,
Caring and Determination.”

Liam will help you discover the power of enhancements.

Liam has returned back to the Bowater's team in late autumn 2019, after a short stint over in Australia.

Liam previously worked for the group as the store manager for our Mag & Turbo business in Vanguard Street, Nelson City.
Coming from that pedigree, you can be sure that Liam knows a thing or two about rims and tyres, aftersales enhancements and truly making a vehicle yours!

Liam is also very passionate about cars, and has been for a very long time. From his previous experience he has a great depth of knowledge and can help guide you through the post purchase part of your relationship with Bowater Hyundai.